1- The ancient ruins of many ages (ancient Roman ruins in seaside Tipaza. In the capital, Algiers, Ottoman landmarks like circa-1612 Ketchaoua Mosque line the hillside Casbah quarter, with its narrow alleys and stairways. The city’s Neo-Byzantine basilica Notre Dame d’Afrique dates to French colonial rule).

2- The Mediterranean sea coastline and its beautiful beaches

1- Currency: Algerian dinar which is so cheap compared to USD as 1 USD equals to 118.28 Algerian Dinar

2- Languages: Native language in Algeria is Arabic but the French colonial rule age left its effect on the language which made the second language there is French.

3- Religion: The main religion in Algeria is Islam which you feel from the number of mosques and the sound of Azan around the day

Main Cities to visit in Algeria

The Capital and the largest city in Algeria, located at north Algeria on the Mediterranean sea coastline (so the best time to visit it is during the summer if you wanna enjoy beaches) and known by its whitewashed buildings of the Kasbah, a city with steep winding streets, Ottoman palaces, and ruins.

Must See Attractions if you have only one day in Algiers

is a port city in northwest Algeria and the second most important city after Algiers. Passing the Islamic dynasties, Spanish, Ottoman and French rule periods left a great diversity on buildings there.

Must See Attractions if you have only one day in Oran

The third largest city in the country. named in honor of emperor Constantine the Great. Located about 80 kilometers from the Mediterranean coast, on the banks of the tiny Rhumel River.  There are several museums and historical sites located around the city.

Constantine is often referred to as the “City of Bridges” due to the numerous picturesque bridges connecting the various hills, valleys, and ravines that the city is built on and around. Constantine was named the Arab Capital of Culture in 2015.

Must See Attractions if you have only one day in Constantine

Annaba is a port city in northeast Algeria. On the Cours de la Révolution, the main street with a broad central promenade, architecture reflects the city’s French colonial past. St. Augustine Basilica, completed in 1900, towers on a hill to the south. Below it sprawls the ruined city of Hippo Regius, with the remains of Roman villas and baths. The Musée d’Hippone exhibits mosaics and objects from the site.

Must See Attractions if you have only one day in Annaba

Tlemcen is a city in northern Algeria. It’s known for Moorish buildings, such as the 11th-century Grand Mosque, with a tall minaret and elaborate mihrab (prayer niche). The tomb of Sidi Boumediene, a 12th-century Sufi teacher, is a place of pilgrimage. Its adjacent mosque is an example of Almoravid architecture, with carved stucco. In the city center, the 12th-century palace of El Mechouar is protected by high walls.

Inside the palace, Chambre de l’Artisanat et des Métiers is a cultural center with local handicrafts. The nearby Tlemcen Museum has exhibits on the city’s art and history. South of the city, Tlemcen National Park is a forested area with protected wildlife and an ancient mosque. A cable car runs to the Lalla Setti Plateau, offering views over the city. East of here is the El Ourit Waterfall. Nearby are the Caves of Béni Add, with unusual calcite formations. Southwest of Tlemcen, the medieval city of Mansoura includes the remains of an ancient mosque and minaret.

There’s no best time to visit the country if you don’t have a clear plan but there’s a best time to visit it if you know the cities you’re going to. As Algeria is a very big country there’s diversity in weather the north Algeria has a Mediterranean weather so it’s nice during summer because of the coastal line while South Algeria weather is hotter during summer because of the Desert. 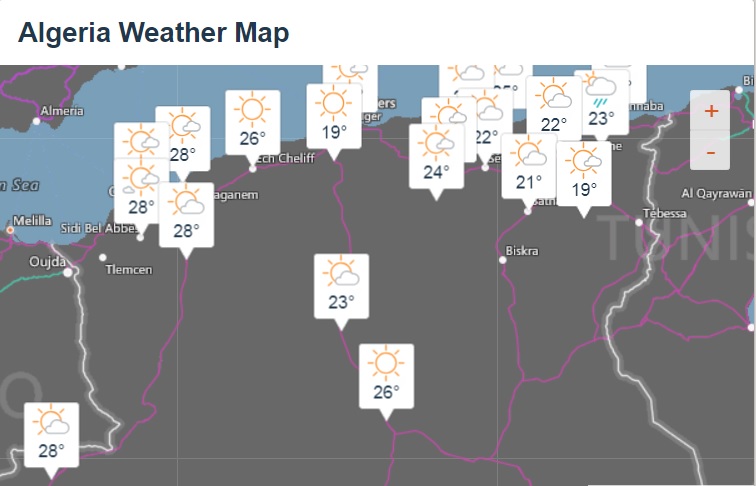 A screenshot to Algeria’s weather in October. Shows the weather getting hotter and dryer as we are heading South

3- Entry and transit is refused for Israeli citizens, even if they are not leaving the plane and proceeding by the same flight.

A Day at the Egyptian Museum

ABOUT US
Newspaper is your news, entertainment, music fashion website. We provide you with the latest breaking news and videos straight from the entertainment industry.
Contact us: contact@yoursite.com
FOLLOW US
© Newspaper WordPress Theme by TagDiv